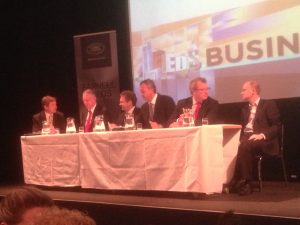 I was really looking forward to Friday’s events, especially after the rest of the week had proved to be so useful and interesting. Here’s my round-up of the final day of Leeds Business Week 2013:

With a panel like that, the debate promised to be very interesting, and it didn’t disappoint.

I asked a question about Scottish independence, and how a yes vote would affect the city, with Yorkshire being just doorstep away from Scotland.

Tony Hallwood commented that airport tax duties would make England not as competitive as Scotland. Obviously it’s up to Scotland and Scottish voters to decide, but broadly speaking, the consensus was that a yes vote would not be a good thing. The main thing for the business community is a quick decision, as any delays hold up investment. Most people seem to be in favour of devolution.

There were celebrations over the announcement that the Victoria Gate and Thorpe Park developments had been given the green light. And we should also be proud of how the city’s cultural powerhouses, such as Northern Ballet and Opera North, have brought visitors and investment into the city. Everyone was also delighted by the successful Yorkshire bid to bring the Grand Départ 2014 to the region next year.

A great session and a celebratory note to bring the week to a close. Full credit to the organising team. I’ve not only thoroughly enjoyed Leeds Business Week 2013, it has given me inspiration and ideas, and a chance to network with a huge range of people. And a few potential business opportunities to come out of it too!