Following the furore caused by the release of Google+, it looks as if Facebook has been forced into making a number of changes as a response to the perception that Google+ gives users more control and more privacy.

Slick New Kid on the Block

Google+ has gone down a storm with the tech community, but as yet, most of the Facebook community are quite happy to stay with Facebook.  When I’ve sent invites to some of my friends on Facebook, most of them just don’t see the point in learning to use a new social networking website – they seem to have enough on their plates keeping up with the changes on Facebook! 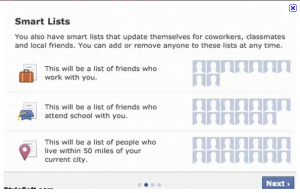 The first thing that’s been addressed is the Circles that are a major feature of Google+.  Facebook always had lists, but they were not particularly user-friendly – they were pretty clumsy and each person had to be added to the list by typing in the person’s name.  With the ability to drag and drop contacts into Circles on Google+, this was a major issue.  Facebook solved this by unveiling the customizable “Smart” Friends Lists.  Although you can create your own lists and choose who appears in them, FB automatically creates lists for you – grouping people into default lists for Work, School, Family and City.  If you do create a list, there’s still no drag and drop facility – instead a popup appears with the Profile pics of your contacts and you need to click on each person and click the Done button when you’re finished.

Another recent change to FB is that you can now subscribe to a person’s updates in much the same way as you would “follow” somebody on other social networking sites.  Although Facebook claims that you can use the Subscribe button “ even if you’re not friends”, when I tested this recently, I discovered that I could only see the Subscribe option on the profiles of people that are friends – in fact, I have automatically been subscribed to every friend I have on Facebook! Most users need to turn this setting on by visting facebook subscribe settings.

Although this option gives you a bit more control over which type (and how many) status updates you see from your contacts, there seems to be something a bit worrying going on here.  In the Facebook blog post launching the Subscribe button, we’re told that you can subscribe to people whether they are contacts or not – this will give you the option of viewing all of their status updates.  Presumably, this means that others can subscribe to you and see all your updates, even if they are total strangers.  Although Ben Parr of Mashable wrote in a recent article on the Subscribe button that it’s possible to turn off the Subscribe button on your Profile as a means of gaining more privacy, I haven’t been able to find a way of doing this on Facebook.  This means that I will need to do a Google search and find out elsewhere how to deactivate this button – this is a major fail as far as I’m concerned.  If somebody who’s used to using the internet and technology has to research how to do this – what chance does my non-techie auntie have of sorting this out?  Facebook has been criticised in the past for violations of privacy and this new development looks as if it will take that to a whole new level.  This means that, far from keeping its users from defecting to Google+ – the privacy issues here could be just what it takes to drive away Facebook users in droves!  One of the main reasons that people have welcomed Google+ for social networking is that it offers a level of privacy that has just not been available on Facebook.

All the Latest News

Another major change to the Facebook format is the Newsfeed.  As far as I can see, this is something that is hugely unpopular with users.  I have seen loads of complaints in status updates about this change – people are finding it confusing and frustrating.  I’ve seen the following comments:

It seems that the improvements to the Newsfeed haven’t gone down as well as the Facebook team would have expected and my advice to them would be “If it ain’t broke – don’t fix it”.  All it seems to have done is to generate a lot of negative feeling towards Facebook amongst its users.

Going from Bad to Worse!

Although it would seem that things couldn’t get any worse – a recent blog post from Dave Winer on his Scripting News site claims that Facebook is using cookies to track users when they are browsing other websites.  He describes the process as “cyber-stalking” and the blog post he’s written has the title “Facebook is scaring me”.  This sort of statement from such a well-known and tech-savvy software developer should make the rest of us sit up and take notice.  Gizmodo has published some advice on how to stop Facebook from tracking your internet use, but for the average user who is using the apps and playing games, etc; this means that Facebook would lose most of its functionality!  The way to do this is to add a Facebook Disconnect extension to your browser, but chances are that the average Facebook user will find this difficult to install.

Facebook’s recent annual conference, dubbed F8, saw the announcement of more changes to come in the form of the Timeline.  This is heralded by Mashable as a “major re-imagining of user profiles”, enabling users to create a “visual scrapbook of everything they’ve done on the site”.  There’s a YouTube video that demonstrates this new feature that’s due to be released in the coming weeks.  If you can’t wait to use it, PCWorld has an article on how you can gain access to this immediately, along with a Getting Started Guide.

All in all, it looks as if the changes to Facebook have been quite unpopular.  When my Mum was complaining about all the differences and asking me to show her how to use Facebook now, I told her not to bother learning how to use the new features as there are more changes to come.  It could just be that, rather than preventing users from defecting to Google+, all these recent changes could be the last straw for Facebook users – we could well be seeing a massive influx of new (non-techie) users who are willing to learn to use a new social networking platform that’s not going to chop and change its user interface at the drop of a hat.

Developers at Google+ would be wise to learn a lesson from this and make sure that the website remains easy to use and consistent as a way of keeping users on board. Thanks for reading my take on facebook, as always I welcome feedback and comments on your thoughts, so get typing and sharing below!