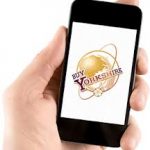 The sun came out for the North of England’s biggest B2B conference today, as Buy Yorkshire returned to the Royal Armouries for its fourth year.

My day began with a bang as I went to see Janet Street-Porter talk about her life and Yorkshire links. Covering everything from her husbands to her career highlights, Janet spoke with a humour and honesty that was really refreshing to see. “I love the rain; it brings out the best in me!” – spoken like a true Yorkshire woman!

It was also great hear Janet talk about her love of food and growing her own produce. Regular readers will know I’m a huge fan of cooking (and eating!) great food and hosting dinner parties. Her Yorkshire favourites include Betty’s Swiss Fitness Loaf and Scarborough Wolf fish.

Interestingly for such a key figure in the media industry, Janet doesn’t believe in being available 24/7. She spoke of the importance of solitude, often going on long walks and trying to think about nothing: a real skill! “Emptiness is a good thing” she said.

It got me thinking about how, without discipline and clear goals, social media can draw some people in to feeling obliged to be 100% connected and available all the time – and often wasting a lot of time online. For business owners especially, it makes sense to either have someone manage all that for/with you, or to give yourself permission for downtime and stick to logging in only at key times in the day/week. A good rule of thumb might be 15 minutes every morning before work, then maybe a couple of one-hour sessions during the week: timed for when your clients are online, eg #YorkshireHour 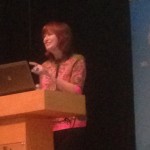 I put the following question to Janet: “Wikipedia lists you as having had numerous media careers. Ranging from fashion editor of the Daily Mail and Evening Standard, through to radio presenting, and then television. So what would you place as being your greatest career love. Or can we assume ‘I’m A Celebrity’ stood above them all?

She joked “well it wasn’t interviewing Tony Blair!” and let us into a little secret about I’m a Celebrity. As a journalist, Janet was encouraged to see what she could find out about each of the celebrities and was given 15 minutes each day to write a diary.

Janet is now writing a column for Yahoo, so that’s one to look out for too.

I asked the panel:“As much as we want to see Leeds United do well for the benefit of the supporters and Yorkshire. Have any of the billionaires ever experienced throwing money out of the window? And whilst the panel is considering this, perhaps they could comment on where they believe most companies throw money away.

Jonathan Straight said wastage happens when you take your eye off the ball. “We spent £400k on concreting land we didn’t own.”

Deborah Medan is quoted as saying one third of business expenditure is wasted.

People were also highlighted as the most expensive part of a business: employing the wrong people is a huge waste of money.

“Not using automation, so people can focus on customer needs instead of pressing the same button or pushing paper round,” said Adam, while Laurence said you “need to know when to walk away and stop spending.”

James advised not to “waste money on things that don’t help the customer. Things need to add value to your offering. Don’t waste getting into new areas. Concentrate on what your really good at.”

Janet gave the example of the Coop over expansion, or (as she called it) “dicks on tables” as a result of macho man syndrome!

Laurence highlighted pressures from shareholders for growth, using Tesco as an example: 1p in 7p spent in the UK goes to Tesco. They have had to expand, so have to look at new markets and ways to grow.

James said businesses in Germany are a good example of a different approach; a different agenda. There are times you should not grow and consolidate for a while. He said supermarket growth is fueled out of fear. It’s about keeping a sticky customer, eg Sainsburys mobile can keep talking to customers about their shopping as well as their phone. “It’s an ecosystem to keep them in your bubble.” 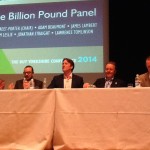 The Billion Pound Panel on volunteering

Jonathan had tried this but didn’t find that staff take it up, especially if they are not involved in charities. Instead, he does match funding for sponsorship donations raised by staff members.

James will give £200 – £350 to any member of staff that is part of a registered charity, while Laurence set up the Laurence Tomlinson Foundation.

The panel also considered the question, “how important is social media?”

Jonathan Straight hit the nail on the head when he commented that social media is good for business, as long as the goals are set out at the beginning. His advice was that you can’t do everything and be everywhere, so focus on one or two streams only – and more importantly, measure it.

In response to a question about how you measure it from Janet, Jonathan rightly said that it depends what you are setting out to achieve. As he pointed out, “to get people to buy from you on Twitter is tough. But to get them to follow you, retweet, and then visit your site IS measurable.”

Another important point he made is that people make the mistake of thinking social media is free. There is always an investment – either in time, or in costs. You need to invest one or the other to get best results.

It was also music to my ears to hear Laurence Tomlinson highlight the role of social media in differentiation and building a distinctive brand (which he said was key for the Ginetta cars business) and in achieving good Google rankings. The more hits; the higher your ranking – and Google is now attributing more and more importance to social sharing.

Laurence spoke about how he gave his each of 2000 staff members an iPhone and wrote an app to help all branches of the business connect with one another and make them feel like family. When they launch a product they use their staff to get website hits. While a software company monitors it all, the app has a “contact LT” button that goes direct to his secretary.

Technologist Adam said “We are a technology business. When Twitter came along, our clients found it difficult to know how to deal with Twitter. These are companies that have lots of processes, and when Twitter came along they dropped everything if one customer gave a bad comment and lost focus.

As always, the needs for a clear strategy is paramount to achieve success using social media for business.

Where I disagreed with Adam is on his view that Twitter works better for B2C businesses. While some large brands are still worried about Twitter, and admittedly there is less evidence of ROI for B2B companies, this is changing. As more B2B companies get on board with social media, there is no clear evidence of the business benefits of social media – my associate Victoria at Northern Lights has shared some great examples.

Other companies and stands to look out for

I am always astounded by the number of companies who invest a huge amount of time and money into taking up a stand at a conference then turn up with an uninspiring stand and uninviting staff – totally missing the point about being engaging (and missing a huge business opportunity!). LSI Promotion @promo_merch couldn’t be more different:

You must see their stand tomorrow! A perfect match for the conference tagline “Think; Work; Play”.

Also great to catch up with Ben Pindar, the newest member of the Northern Lights team, Virtual DCS and Caltech IT.

And for great use of social media, I also wanted to mention Winstons Solicitors @WinstonLLP (great use of Twitter on the day – unusual for the legal profession) and Mark Longbottom who is always inspiring.

What am I looking forward to? See my blog about Yorkshire Mafia and the power of LinkedIn groups for business networking.

Sign up to receive my weekly blog delivered to your inbox.