It’s really important to be ahead of the game when it comes to SEO and Web Marketing. So being kept informed of the goings on and World Wide Web changes is completely crucial.

Google recently announced and performed a massive shake up impacting a massive 11.8% of its queries, this is at the same time that the New York Times published a story on how J C Penney had been potentially manipulating the ranks or have been a victim of spamming from a competitor. It’s now clear that Google are using new techniques to decide where and how to rank sites.

Gone are the days of simple link building and article submissions, we are in a new era of social signals and making sure we engage with our consumers.

1. Engaging with our audience

How many of you have Google Analytics installed on your websites, an extremely valuable tool for analysing your traffic, users and learning what works and what doesn’t. The bad news is that by having it on your website Google can also analyse your website! Big brother is always watching!

How do Google know if you’re engaging with your audience, the answer is simple, they are analysing the following:

Google is eager to see referrals from Facebook, Twitter and all the other social media sites, this is GOOD, referrals from social media platforms (social signals) suggest that people are talking about you and recommending you, but one way of preventing the spam is seeing if those visitors are engaged once they arrive, therefore are they staying for long, clicking through your website or simply bouncing straight off.

I am not by any means suggesting removing your Google Analytics code, Google will have ways round this and it’s far too valuable and if anything we should be engaging with our audience!

Mobile search on Google alone has increased 5 fold in the last two years, it makes sense; how many people own an IPhone or smartphone! Did you know that search results on google’s mobile platform are different to search results on its traditional website!

It’s clearly obvious Google is utilizing Google Local (Google Maps) for ranking sites; in fact back in October they announced Google Boost, advertising on Google Local. So far it’s only been released in the US, but we can be sure it will be coming to the UK! It’s so important to have a listing, and more so an optimized listing.

Both Google and Bing (Microsoft’s search engine) representatives have confirmed that social signals play a massive role in rank placement; you can read a more in-depth report at Econsultancy.

Way before this announcement, it was clear that on a number of sites I work for, social signals are already influencing the ranks. Many of the challenges here will be simply to keep on top of social networking. It’s the old joke of the employee PLAYING on Facebook is now required to WORK on Facebook!

You may have noticed that Google now has an option for Instant Search, this is where search results are displayed literally as you are typing, this can have a major effect on keywords and phrases that in the past have worked extremely well, but now will underperform due to users being presented with results way before typing what they where originally going to. Good long tail searches could be a fad of the past.

Did you know that YouTube has become the second most important search engine in many countries? It suggests Video SEO should be something that’s not forgotten about. In fact its clear it’s something that is becoming more and more important and can be used to your advantage.

Try doing a search in Google, I would suggest 30% of your searches will display a video from YouTube on Page 1.

See this simple example of a search for “Line Dancing” 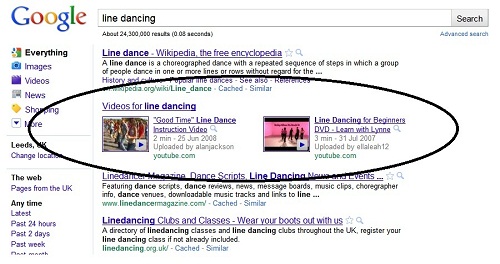 Google is publishing content more and more quickly, they have integrated Facebook and Twitter into their results, trying to offer “Live” results, giving users the most up to date search results. This can play a major role, the more you update your social networking sites, with relevant and engaging content, the more chances of appearing in the results.

This has been around for years, but in the last two it’s exploded again with Facebook and Twitter, and now Google offering recipe searches!

This is all about tagging you content for the likes of Google to be able to offer it quicker and easily to its users.  You can even tag products, prices and brands again helping Google put them higher on the rankings.

Last month it was announced Microsoft is buying Yahoo, it’s one to watch, will they overtake Google? Google is all people talk about, but we must not forget the 25-30% of people that don’t use it! I don’t see this having any significant impact yet, but it’s one to keep our eyes on.

10. Engaging on other sites

We tend to think of simply driving traffic to our own sites, however as we realise social networking and signals are important so are many other sites out there. Examples would be:-

So there are 10 things we need to review in 2011 to make sure we are ahead of our competitors. Are you ready?