How to raise £3k in 4 days using Facebook Live 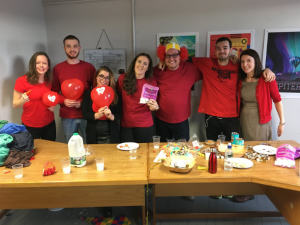 Have you heard of Wear Red Day? It’s an annual event in February through which the Children’s Heart Surgery Fund (CHSF) charity raises money for its ‘Keeping The Beat’ appeal to build a revolutionary new children’s heart theatre. This year’s event saw support from the likes of Leeds Rhinos, Aldi, Trinity Leeds and more.

As a charity that means a lot to Fleek Marketing, due to their close relationship with Jonny, we wanted to get involved too. We turned around a Facebook Live campaign with less than a week’s preparation and managed to raise £3,197 for charity in the process!

So how did we do it?

1. Choose a good cause

It all started on a Monday morning, when Jonny walked into the office and announced that he wanted us to be part of Wear Red Day as a thank you to CHSF. Last year Jonny’s daughter had open heart surgery to repair a congenital heart defect and the charity was invaluable getting his family through such a difficult time.

The thing is, Wear Red Day was on Friday and this was the first time we’d considered getting involved! With less than four days to plan and implement our fundraising strategy, theteam began brainstorming immediately.

We knew that we wanted to utilise our social media expertise to come up with a powerful campaign that also demonstrated the fun side of Fleek. Our initial thoughts were to put on a series of activities including world record attempts, fun challenges (and some not-so-fun challenges!), whilst streaming it all through live video. And with the clock ticking, we decided to run with it!

After a team creative meeting, we decided that Facebook Live would be the best live video platform to produce the desired results. The facts that Facebook Live videos see 10 times more comments than regular videos and that we’d already seen success with standard video on our Facebook page helped influence our decision. And with over two billion Facebook users, compared to just 10 million Periscope users, it was an easy choice for us.

3. Set up a JustGiving page

As with any fundraising event we had to find an easy way for people to donate money, so we began by setting up a JustGiving page. This meant that we could use our online campaigns to drive traffic to the page and persuade people to make a donation. We also asked everyone who came down to the event to donate money in-person on the day, which we then added to the JustGiving page.

The next step was to promote our fundraising activities and let everyone know about what we were doing. Firstly we spread the message round the other businesses at The Tetley (where we are based), asking them to come to our office on Friday to cheer us on. We also encouraged our friends, family and other contacts to spread the message online, using #WearRedInFeb and tagging our social media accounts. 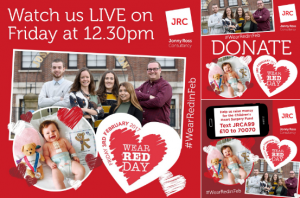 We also designed professional imagery which we used in a lot of our social media content throughout the campaign. This consisted of various different images, each with clear call to actions.

CHSF heard about what we were doing through our social media campaign and got in touch with us to say they wanted to come down to the office to support us on the day too! This was great news for us as it increased the reach of our campaign to the wider CHSF supporter networks.

As winners of Fit Small Business’ Best Digital Marketing Blog for the last three years, we knew that a blog campaign would be effective. We knew we needed something that would grab people’s attention, so we chose to highlight our world record attempts in the title and Jonny’s personal story with CHSF in the main body of text. We added five clear calls to action at the bottom of the blog, which we used in our email marketing and text message marketing campaigns too. CHSF also blogged on their website and promoted the campaign through their social channels, which additionally provided some high domain authority backlinks for Fleek Marketing too.

Using Dotmailer, we repurposed our blog campaign for a targeted email marketing campaign – essentially a call for support. Using the very personal subject line ‘Would you be able to help me?’, we sent the email from Jonny’s personal email address to all our friends and contacts. We used the five calls to action again, which worked tremendously in driving traffic to our pinned tweet and Facebook status. We received an email open rate of 36% and a click through rate of 7% – significantly higher than industry averages.

The team also updated our email signatures to include the promotional images and links to our announcement video.

9. Promote the hell out of it!

From here we put together tons of social content for the rest of the week, pushing traffic to both our blog post and the JustGiving page. This included a variety of different posts including each of the professional images that we had designed, more Facebook videos from individual team members and promotion across all our platforms – utilising relevant and local hashtags and Twitter hours, such as #LeedsHour, and targeting these more specific audiences.

Throughout the week we also posted a series of Facebook Live videos with teasers of what we would be getting up to, behind the scenes videos and reminders of how to donate.

We made sure to push our existing followers from all of our different channels too, for example we included call to actions to like our Facebook page so that users would get a notification when we went live on the Friday. This resulted in 155 new Facebook page likes during the campaign.

All of this activity helped to create a huge buzz on social media, leading to a 1,086% increase in engagement across the Facebook and Twitter accounts compared to the previous week.

On the Friday morning, Jonny even went live in his unmissable clown costume which certainly attracted a lot of attention when he arrived at The Tetley!

The final step for us was to go live. We hosted a very enjoyable 30-minute Facebook Live stream which reached over 3,300 people and amassed 413 link clicks and 164 likes, shares and comments! If you missed the video, you can watch it here.

What were the results?

Over the period of the campaign, we gained 45 new Twitter followers, 155 new Facebook likes and a total of 42,683 social media impressions. We also managed to rack up a total of 5,750 video views across our social media platforms.

Our Facebook announcement post reached 1,800 people and received 192 clicks and 52 shares, likes and comments. And our pinned Tweet earned an amazing 6,213 impressions, 738 video views and 278 engagements.

Watch us try some silly tasks this Friday at 12.30pm on Facebook to raise money for @CHSurgeryFund #WearRedinFeb https://t.co/H0vMNjKYeq pic.twitter.com/sWEgjqBv0h

And on top of all this, we managed to raise £3,197 for the Children’s Heart Surgery Fund!

“You guys were the second biggest donators out of all Wear Red Day 2017 contributors, which is an amazing amount!” said Andy McNally, Communications & Marketing Manager at CHSF.

“All the money from Wear Red Day this year is going towards our Keeping The Beat appeal for a revolutionary new children’s heart theatre. We’re aiming to raise £500,000 by September 2018, and are currently at around £335k. You can read about it here.”

“The fundraising that jrc.agency did stood out as one of the highlights of Wear Red Day and was so expertly done. The team came up with such a fun and original idea for raising money – putting on a live fundraising show on Facebook! On the day they crammed the slot with a whole host of crazy challenges including eating as many chillies as possible and the ‘cinnamon challenge’.

“There were laughs, a few tears (from the chilly eaters!) and a HUGE sum of money raised for Children’s Heart Surgery Fund. They created a real buzz on social media, with loads of people watching the show and donating.

“Massive thanks to the whole team for their energy and enthusiasm for helping children born with congenital heart disease in our region.”

What did we learn?

Looking back at the campaign, it most certainly turned out to be successful. But saying that, there are a few things we would have done differently.

A Facebook event page could have worked quite well, and also would have been useful in giving us a better idea of how many people were following our fundraising activities. 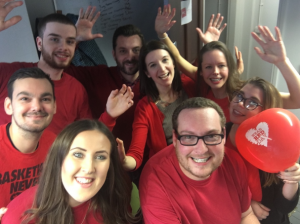 The campaign also may have worked well if we’d ran a series of social advertisements alongside it. Facebook Ads in particular could have been effective in pushing traffic to the rest of our social media campaigns.

In hindsight, we also should have utilised LinkedIn Pulse. We’ve found that posting the first paragraph of our blogs with a backlink to the full blog post works really well.

And given more time and resource, we’d ideally have also run an integrated PR campaign to amplify the social campaign.

All in all, our campaign was a huge success for us and CHSF! It’s fair to say that the power of social media really shouldn’t be underestimated. We’d like to say a massive thank you to everyone who was involved in the campaign.

Fleek Marketing is currently working with CHSF to review its SEO and online strategy, and has delivered SEO training to the CHSF team.

If you’re looking for an award-winning digital marketing agency to run your social fundraising, online video or social media campaigns then why not get in touch with Fleek Marketing?

For more digital marketing tips and advice, sign up to the blog.