Last week, we looked at how to create an integrated social media strategy. This week, I’m going to look in more detail at some of the best charity social media pages – what works well and why they are successful.

Dogs Trust is the largest dog welfare charity in the UK. Along with advertising campaigns, they use social media to build profile and awareness. 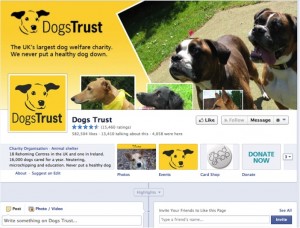 Their Facebook statistics speak volumes, with 582,504 likes and a staggering 13,410 people talking about them.

Here’s how they do it:

Macmillan Cancer Support is another charity that has a great following on Facebook.

Earlier on in the year, Macmillan Cancer Support held a Q and A with its interns through their Facebook page. This also lead them to advertise for new members of staff and volunteers – a great example of using Facebook to both promote what you do and use the power of your followers to appeal for support. 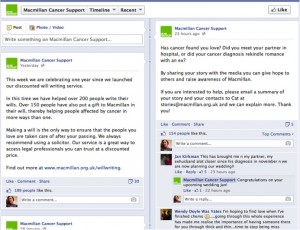 The British Red Cross is a volunteer-led humanitarian charity that helps people in the UK and abroad. As well as providing support to world disasters, the British Red Cross also holds first aid courses across the UK in order to improve public knowledge about what to do in a medical emergency.

With a staggering 88,963 followers, the British Red Cross Twitter account is an excellent example for any charity looking to engage and inspire Twitter followers to get involved with the charity.

British Red Cross regularly runs several campaigns and use Twitter to inform followers of them. It also tweets regularly with help and advice, such as ‘How to prepare for the floods…’ with website links to instant and relevant information. This interaction and thoughtfulness contributes to the page’s popularity.

British Red Cross actively encourages followers to get involved with their social media sites, with a section on their website specifically titled ‘Social Media’. It features information as to why followers should get involved and they directly ask followers to: 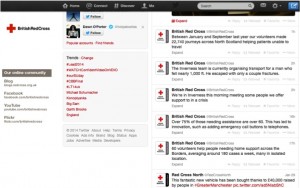 A review over a two-day period showed:

The content is varied and interesting, but not repeated or similar. Each tweet provides followers with an insight into what is currently happening across the world and how British Red Cross are supporting and providing relief.

Great Ormond Street has over 64,000 followers and has sent out over 15,000 tweets. I think it has created an enticing and attention-grabbing profile, which encourages followers to really look at the page: 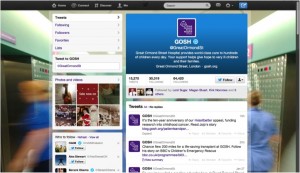 An important point here about asking for donations: none of the charities I’ve featured use emotional blackmail or directly ask for money. This is key. Put yourself in the position of a follower: would you be more compelled to donate or support a charity if they provided you with information and encouraged you to get involved or if they simply tweeted asking for donations?

Charity Water has one simple mission: to bring clean and safe drinking water to every person in the world.

The charity uses Instagram to create an online account of projects, with frequent photo posts on the projects being carried out, and the difference they have made to communities across the globe. The images are mainly positive and happy. 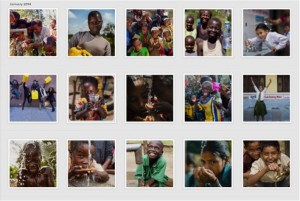 Images (and viral videos) are a key way of reaching out to people and emotionally engaging with them to encourage donations or them to invest time in you. Charity Water is an excellent example of how images can be used in a positive way.

Amnesty UK posts images related to campaigns or related issues. Again, none of the images are used to shock, but are instead focused on educating about the work they do. 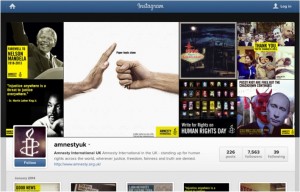 The profile page top banner is a collage of images, with the logo clearly prominent as the profile picture.

Amnesty UK posts images relating to ongoing or successful campaigns, acting like a news feed as well as a set of images.

In the example below, the image top left of the screen states that the UK will now be accepting the most vulnerable refugees from Syria. Then, when the image has been posted, Amnesty UK has created a caption thanking those supporters for making this possible. 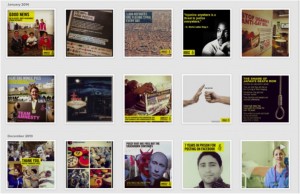 “Thanks to your actions, the UK government has u-turned and will accept some of the most vulnerable #syria refugees! Well done everyone! #goodnews #success #amnestyinternational”

In a future blog, I am going to look at some of the best charity Pinterest, Google+, YouTube and LinkedIn pages and give some free advice on what works.

To ensure you don’t miss it and to receive a copy direct to your inbox, click here to sign up for my weekly blog.

Do you work for a charity that is developing its social media presence?

What tactics do you find work well?

What have been your most successful charity social media campaigns?

If you are planning a new project and would like more information about the work I do on social media and SEO for charities, just give me a call on 011 33 20 21 21.

This blog post is based on a talk I recently presented at the Institute of Fundraising Yorkshire conference on the topic of ‘Creating an integrated social media strategy’. You follow the conversations on Twitter using the hashtag #IoFYorksConf