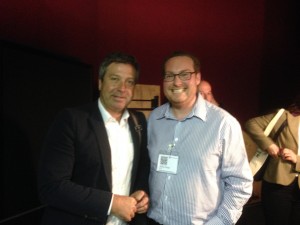 After day one at Buy Yorkshire 2014 was so inspiring, I had high hopes for day two.

John Torode kicked off my morning. As a cooking fan and foodie, I was delighted to see the Masterchef host added to the bill, even if it was at the expense of Karren Brady, whom I had also been looking forward to seeing but who had to pull out due to Apprentice filming commitments.

John Torode on grabbing opportunities (and making use of curve balls)

John spoke of the value in grasping unexpected opportunities. He described how – as a youngster – he used to be a “milk jockey”, delivering milk to local restaurants on Friday nights. To earn a bit of extra cash, he asked one of the restaurants if he could wash dishes for them at weekends. It was working in this restaurant that inspired him to become a chef.

“Anything is possible” and you should “do anything; try anything”, said John, whose media career came along by accident as a result of him saying yes to an unexpected opportunity.

It was inspiring to hear John speak of the power of “yes” and encourage others to try new things. He explained how he doesn’t have a “big dream” for his life and career, just many little things he would like to do – and be open to new experiences. This is a powerful message: you never know when the next big thing is going to cross your path, so keep your eyes open and be prepared to take a chance. 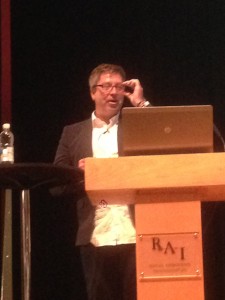 I asked John if he had any plans for John and Gregg or Torode and Wallace to become the next famous double act to grace our homes, a la Morecambe and Wise; Laurel and Hardy; Ant and Dec. And whether they got on with each other both on and off the stage.

“Can’t stand him!” John joked, “but actually, we have only been out to dinner together three times in the last ten years”. It goes to show that unlike Ant and Dec, a great working partnership doesn’t have to involve you living in each others’ pockets. Great partnerships can be about two very different people, each bringing different skills to the table.

I then went to see Gideon Lask, MD at Buyapowa, speak on the evolution of ecommerce: are you ready for social sharing?

I asked, “has the tipping point arrived for social retail? And if so what was it for you?” Gideon noted that there had been a major swing in last six months. Where once companies used to just say “no” to social, they have since evolved through employing teens to manage social media accounts to spending £19 million on social. The process has involved a shift in culture, and retailers are getting there – although there is still work to be done.

I spoke about this in my blog post on the growth of online retail and the importance of digital communications, and noted how some retailers, such as ASOS, really excel at social. The growing interest in digital was hugely apparent among the fashion retailers I met when I spoke at the recent Moda UK conference.

Surprisingly, Gideon said he saw no value in Google+. While take up of Google+ as a communication platform has been stagnant, I always advise clients to at least post links through it, if only for the disproportionate value attributed to Google+ social sharing by Google’s search engine. It’s an easy win. Gideon didn’t really mention SEO at all, which also surprised me. Although he did concede he was no SEO expert.

Paul Lindley on ‘thinking like a toddler’ and Ella’s Kitchen

Next up for me was Paul Lindley, founder of Ella’s Kitchen, asking us all to “think like a toddler.” I love this! I blogged a couple of years ago about what we can learn about digital marketing from children. Children have a natural curiosity and lack of fear that enables them to achieve amazing things – and be constantly delighted by the world around them. 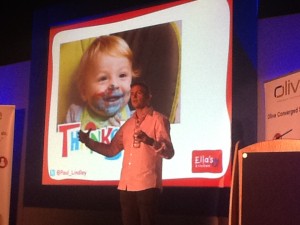 Paul described how – as a toddler – everything is brand new and exciting. He asked us to imagine the girlfriend you recently met lives in China, and when you travel over to see her you get butterflies. That’s how toddlers probably think and feel.

Paul believes kids are really influential people. His competitors think about mums and sometimes dads, but no one thinks of the kids first. This is how he cut into the market share. He couldn’t compete on price or volume, so needed something new. He created an emotional brand; a person-to-person brand.

All the big brands are about function and safety. But his mission was to improve lives and make relationships better with food. This gives Ella’s Kitchen a purpose. And it’s not just about making profit. Purpose and profit are both really important, not just one or the other.

This strategy has worked. Ella’s Kitchen has 24% market share in the UK, and 50% of its revenue comes from outside of the UK, as it serves customers from 16 countries.

Paul’s 5 steps to success are:

(2) Set out a clear and simple mission

(3) Build a great team (employ people that are passionate about what you are doing). Do this by choosing staff who:

(4) Keep your belief in your gut feeling

What can we learn from toddlers:-

(1)   Never give up. Toddlers don’t. They may fall down many times but they always get up, otherwise they wouldn’t have learned to walk.

(2)   Be creative – toddlers have no fear of failure

(3)   Get noticed – put a toddler in front of people and they will notice them! Don’t be afraid of making noise. PR and social media are two fantastic ways you can do this without spending too much.

(5)   Show your feelings – you know when they are both happy and sad. There is nothing wrong with opening up now and again. Businesses are about people. People buy from people they trust, so show them your feelings.

(6)   Use different strategies – why crawl when you can take the car? Ten toddlers would employ ten different methods to get a present from the other side of the room. Some might even cry to get you to bring it over!

(7)   Involve others – collaborate with people, and even competitors.

(8)   Show, don’t tell. Toddlers are desperate to show. Credibility is gained from showing not telling. Get up and do it. You then don’t need to tell as you have already shown.

(10) Have fun – life’s too short. Maintain a good work/life balance.

Two people who have inspired Paul: 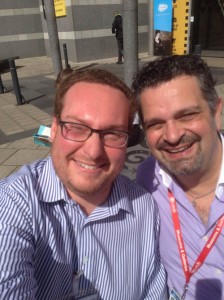 And finally, some of the other people who have brightened up my day include David Israel (always brings a smile, and a delight to take some time out to sit in the sunshine and chat with today), Jonathan Straight (great to see – it had been too long), Esther DT from Forward and Thinking (refreshing to hear her honesty about the stands that needed improving today!) and photographer, Becky Joy (pictured below). 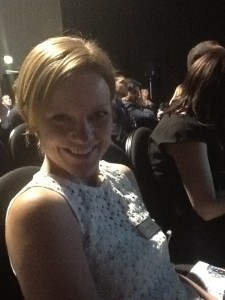 I also had such a good conversation with Mark Evans from Banners and Mash that I’m going to write a whole other blog on it – watch this space!

Did you go to Buy Yorkshire this year? What were your highlights? Who inspired you the most? Please do share your comments below!

For more of these discussions, sign up to receive my blog weekly in your inbox.